I stopped this young gentleman in the middle of the road even though I could see he was struggling with his bags. I just couldn't keep my eyes of the red case. I was fascinated with its vibrant colour in the middle of a rather dull road.

As it turned out, he was on his way to a music competition. His band reached semi-finals and he was on his way to take part in the final round of audition in the hope of winning a recording contract. I felt bad for stopping him knowing he was carrying a heavy load but he was super friendly and chatted with us quite happily. I later posted his picture on flickr and one of my mates recognised him. They work together. London is such a small world. 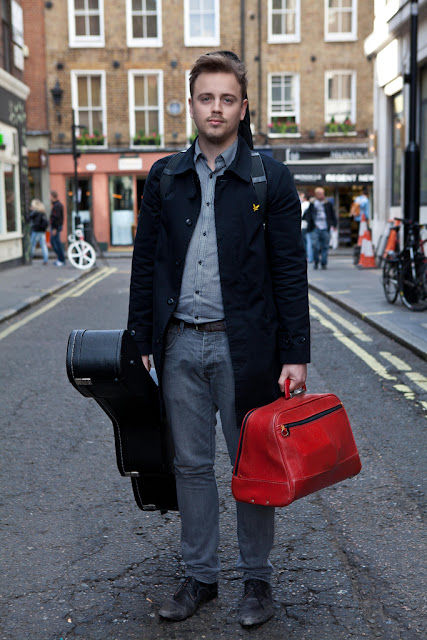 aLL OF THE PHOTOGRAPHS HEREIN, ARE COPYRIGHTED BY THE PHOTOGRAPHER. NO PART OF THIS SITE, OR ANY OF THE CONTENT CONTAINED HEREIN, MAY BE USED OR REPRODUCED IN ANY MANNER WHATSOEVER WITHOUT EXPRESS PERMISSION OF THE COPYRIGHT HOLDER.

Hope you enjoy the blog.

Promote your Page too